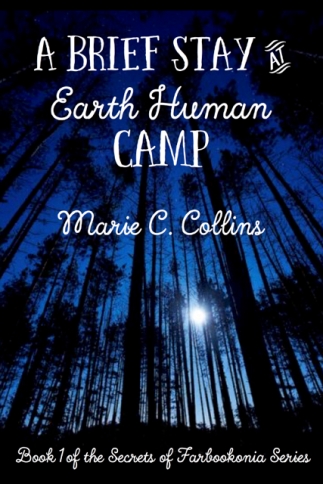 A Brief Stay at Earth Human Camp: Book 1 of the Secrets of Farbookonia Series

Once you find out your mother is an alien, what ISN’T possible?!

That’s what 12-year-old Anne and 10-year-old Atticus Reade want to know. Minutes after learning that their mother is from the planet Farbookonia and that their parents’ secret project has put them all in danger, the children are wrenched from their sheltered existence in the Midwest and whisked off to a safe sleep-away camp in New Jersey — each with a tiny, protective “Globot” on one shoulder.

Painfully aware they’re not like the others at camp, Anne and Atticus do their best to fit in while concealing their alien background and the “special talents” that go with it. But everything is so new to them, they have a hard time sorting reality from fiction. Quirky campers, campfire ghost stories, a bizarre camp director, Anne’s mysterious dreams, and Atticus’s unusual animal encounters are all equally disturbing.
Just as they start getting the hang of life among young Earth humans, a broadcast on the Rec Hall TV shakes things up, and things that are truly strange emerge from normal newness. It turns out Anne and Atticus — and their new friends — may not be safe at camp after all. A Brief Stay at Earth Human Camp soon thrusts them into a reality they wish was fiction.

Q. Welcome, Maylin! Thanks for agreeing to talk to us. Should we get started? What is your favorite thing about yourself?
A. Oh. Well, that’s kind of an embarrassing question. So-o-o … hmm. Okay, I guess I’m — wait, really? I mean, I hate to use up my pass on the first question but … Yeah. Pass.

Q. If you could change one thing about yourself, what would it be?
A. Much easier! I would be more — patient? When I have something on my mind, I can’t think about anything else. Even if there’s nothing I can do about it. Like right now, for instance. Anne’s father gave me Anne’s email address, but I have to wait until they get moved into their new house and someone sets up her computer and hopefully a phone. Right now we can’t video or talk or even write because Dark Ages! How did people even live before technology?! It’s only been one day — and I probably only have to wait a day or two more — but I can’t take my mind off it. It’s a problem. I need to talk to her. When she finally logs on, she’s going to see about 50 emails from SO-not-patient me!

Q. You talk about your mom in A Brief Stay at Earth Human Camp, and we meet her at the end of camp. Who else is in your family?
A. *shrugs* My dad’s not really in the picture, you know? It’s okay that you asked, but I don’t really want to talk about him. And I totally hate it when someone gets all “oh I’m so sad for you” over that, so please, don’t be sad for me! I’m not sad so I don’t really know who you’d be sad for. I live with my mom and Aunt Mingmei (my mom’s younger sister) and I wouldn’t change a thing.

Q. No judgment! Sounds cozy! So what’s your favorite thing to do together as a family?
A. Yay! Another easy one: Watching movies together at home. All three of us love it. If competitive analyzing and talking was a thing, my mom and Aunt Mingmei would be the world champions. When I was little, they sat on either side of me and talked to me through every movie we watched to make sure I got stuff! I loved it then, but when I got older it got annoying because I wanted to get stuff on my own. So get this: Now they take notes so they don’t forget what they want to talk about! After the movie’s over, I just sit back at let them go at it. I can barely listen as fast as they can talk! The thing is, they’re super interesting. And I totally love it when I say something they didn’t think of. It doesn’t happen often, but when it does, they go quiet for about 10 whole seconds, then take off again, only on the reboot they include what I said! Okay, so it’s nerd joy …

Q. In A Brief Stay at Earth Human Camp, Anne and Atticus go to camp for the first time. But you’ve spent other summers at the same camp. How was this summer different?
A. Wow, how wasn’t it different? Did you ever do that thing with two magnets where they snap together? That’s how Anne and I became friends. It was instant. I never had a friend like that before. But really, everyone was different — and not just because we were a year older. I think because Anne and Atticus were new and questioned everything, we all started asking ourselves the same things. Like yeah, why is so-and-so always so mean? And why do I hang out with this person and not that one? You know? It’s like we all suddenly realized we had choices — then these invisible gears rotated, shuffling people I already knew into this perfect group of friends! Who knew that was even possible?! Amazing. And that doesn’t even touch on the bad stuff (which Marie said I shouldn’t talk about by the way). So the short answer? Before and after. My life will be forever divided into what it was like before this summer and whatever comes after it.

Q. It’s pretty clear from A Brief Stay at Earth Human Camp that you really like science fiction. A. You can say it. It’s okay: I’m a little obsessed. No, wait — you can’t be “a little” obsessed – obsessed means “a lot,” right? So okay, I’m just obsessed. I don’t skip meals or not do my homework because of it or anything, but I’m definitely into it. Wait – what was the question?

Q. I haven’t asked it yet! If you could be in any science fiction movie ever made, what would it be.
A. Wow. Okay. Right back to before and after. Up until this summer, I would have said Star Wars. I wouldn’t want to be a character though. I’d want to be a techie behind the scenes — the one in charge of the robots. I kind of have — had — a thing for C3PO and R2D2. Dream job: Keeping the robots in line. But that’s all changed. You do get that my very own life became science fiction this summer, right? For as long as I can see into the future, I think reality’s going to be enough for me — it might even be more than I can handle.

Q. What would be the perfect gift for you?
A. *big smile*

Q. I sense that you are thinking about your perfect gift …
A. *bigger smile*

Q. Okay, you’re right. This is a no-brainer. A robot?
A. * huge smile while nodding vigorously*

Q. All right, Maylin. Thank you so much for talking to us today. In A Brief Stay at Earth Human Camp, you promised Anne and Atticus you’d send them a sci-fi watch-list after camp, and I understand you’re going to share it with us, too. Is there anything you want to say about it?
A. Oh, yes! Thanks. Well, first of all, this list could easily have been 100 titles long. It was SO hard to keep it to 20! To make it work, I tried to define science fiction as our relationship to science, space, or the future. This eliminated paranormal and horror, which is an arguable distinction, but definitely helped me stick to the limit. Also, I tried to choose an early representative of what you might call each subgenre, then didn’t repeat other examples in that category. For example, I included Gozilla, but left out Mothra and King Kong. The way I see it, if you love Gozilla, you’ll be motivated to seek the others out. As another example, I included The Thing From Another World, but left out The Blob. (Heehee, notice I just secretly added some titles to the list?) There are definitely some places where this gets blurry. That probably just reflects my personal taste. The only other thing I would say is that, in terms of how sci-fi has evolved so far, you can’t leave out sci-fi books! But that’s a topic for another day. ☺ 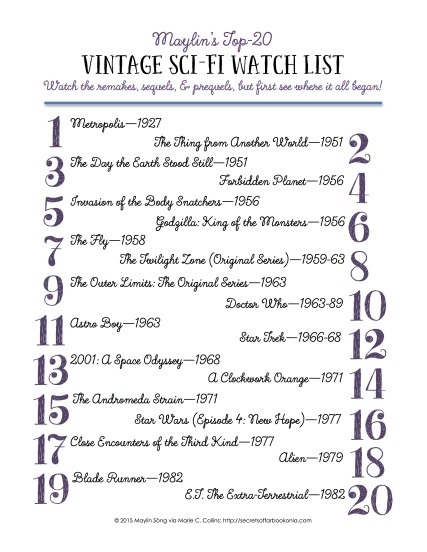 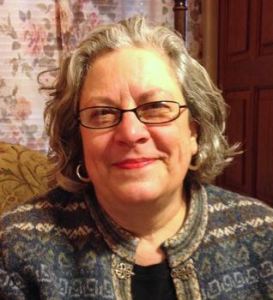 Marie C. Collins lives in Lambertville, New Jersey (USA), with her two dogs, George Eliot and Henry James, who — in spite of their snoring and a tendency to sniff horrifying things — are very good company (and in return, willingly endure Marie’s insistence that they love being kissed on their snouts).

Marie holds a bachelor’s degree in English and Journalism from Douglas College at Rutgers University and a master’s degree in English Literature from Temple University. She has held sundry jobs throughout her life, like caregiver, cook, waitress, newspaper reporter, and even a brief, misguided stint as a ballroom dance teacher. However, for most of her adult life she has written for hire, usually on topics related to education, as writing is the thing she likes to do best.

Marie has a daughter she adores, Laurel Pellegrino, who is now a doctor in Seattle.

Throughout Marie’s life, she has at times felt like an alien — mostly because she was extremely shy and didn’t react to things the way other people did. When she decided it was time to try to write a novel, she found herself wondering what it would be like to actually be an alien — then it struck her that that might be a good place to start. But since she’s also intrigued by the way cultures blend to make each of us feel a bit “different,” she decided her aliens should be half Earth human as well.

Marie is currently writing the second book in her Secrets of Farbookonia series: The Quest for Normal. Her goal is to publish it at the end of 2015.